How COVID-19 Spurred Eighth Generation to Pivot With Purpose 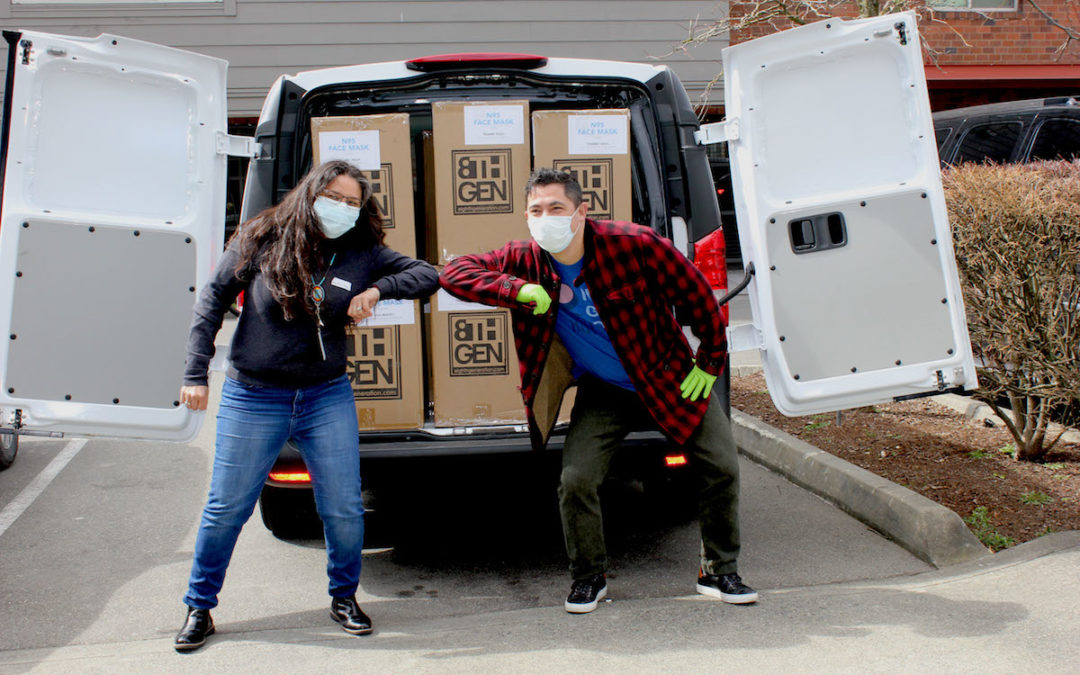 The COVID-19 pandemic has put many businesses into full existential-crisis mode. Eighth Generation, which sells blankets, apparel and accessories designed (and oftentimes manufactured) by Natives, isn’t one of them.

When the Coronavirus hit, the company helped its community, then looked to strengthen its business model. Amid the doom-and-gloom news of COVID-19’s effect on people and the economy, Eighth Generation is a hopeful example of a business principle few people are talking about: Sometimes, a crisis accelerates evolution and needed change, and a business can emerge stronger when the dust has settled.

Eighth Generation came into 2020 still processing the biggest change since its founding by Louie Gong, Nooksack, in 2008. The relentlessly entrepreneurial Gong had risked his personal livelihood numerous times over the years to keep Eighth Generation afloat, and had never taken out a business loan, a difficult path that demanded a lot of emotional labor from its founder. In November, Gong sold his company to the Snoqualmie Indian Tribe, while staying on as CEO. The move would give Eighth Generation access to more resources, allowing expansion with an owner that respects Native culture and values. The ideal scenario of producing blankets in-house with Native American wool is coming to fruition with a commitment to make textiles here in Seattle, Gong told Native Business when the deal had closed.

As the impending Coronavirus scenarios began to take shape earlier this year, many businesses looked to help particularly as experts were warning that the federal government’s response would be insufficient. When we first learned about the outbreak of the COVID-19 pandemic, of course, we were really concerned for our community as well as our staff, says Serene Lawrence, Ojibwe and Hopi, Eighth Generation’s senior project manager. One of the first things on our mind was, what can we do at Eighth Generation to help our community right now? One of the first ideas that came to mind was to reach out to all of our connections nationwide, as well as globally, to try and find and locate some FDA approved personal protective equipment.

Gong’s desire to help out was inspired by Eighth Generation’s prestige in Seattle as well as its founder’s own personal history. The whole project is really based in relationships that dart out from Eighth Generation sort of like an octopus, Gong explains. We have roots in Seattle’s nonprofit community that go back 20 years, including really strong relationships with the Seattle Indian Health Board, which is where I had my first office when I first moved to Seattle 20 years ago. It was the Seattle Indian Health Board that sort of brokered a lot of my early forays into the Seattle Native community.

So much of the COVID-19 response or lack thereof in the United States has had to do with supply chains: where is the life-saving material and how can we get it to those who need it? Gong looked at the problems from the vantage point of a CEO of a business that sources materials both domestically internationally. Over the course of five or six days, Eighth Generation, as a team, worked very diligently to identify the specific PPE (personal protective equipment) that was in need and secure it, because it is in huge demand. It was being sold as it came off the production line and then we’d arrange for expedited shipping to Seattle. We were able to do the latter two things, which is secure that product and then expedite shipping by leveraging the relationships that we have with overseas manufacturers.

Lawrence describes the operation that followed as an adventure, one that demanded employees learn about a whole different industry in a hurry. [There] was a lot of kind of back and forth between our team [and the Indian Health Board], she says, as well as me with multiple suppliers all around the globe, asking questions, telling them what our community needed, kind of checking and verifying that this equipment was up to standard, and also kind of figuring out what we could get with our means. Being that the supply of personal protective equipment is dwindling, and everyone’s looking, to find this equipment was very hard and it was a matter of urgency to get this equipment as fast as we could, because each day that we continue to have this discussion with multiple people all around the globe, the quantities of PPE were dwindling. As you can imagine, the prices were going up every single day as well as that equipment became more scarce and hard to find. So really, I felt like I and our business managers were working day and night just reaching out to people having those conversations, learning about what the options were to find that PPE, and eventually, that hard work did pay off, but it took a lot of late nights, communicating with people across the globe to make that happen.

Eighth Generation was able to provide 10,000 units of PPE. It feels really good to be able to give back to the health board and to support the people providing direct service during this difficult time, because it’s almost like coming full circle, Gong says. In fact, the place where we dropped off the 10,000 units of protective equipment was right in front of the office that I had at the Health Board 20 years ago. So, it was a literal circle that went all the way around the globe.

Eighth Generation’s ability to step up and help clearly pleases Gong, but he quickly learned that the crisis would need more than Eighth Generation could provide. After all, like so many businesses, Eighth Generation was also trying to survive while looking out for its own employees. Our intention was to [help with PPE] one time because we are not a distributor of medical equipment, Gong says. I did not expect the outpouring of requests for more PPE that I received from Tribes and small clinics in rural areas, and individuals who had family members who were providing direct service. I started getting those requests via text message via my Facebook, via email. It was a lot of emotional labor to try to examine figuring out whether or not I could help personally. We spent several days examining the viability of doing it on an ongoing basis and we decided that it was not. It was too far outside of our wheelhouse to increase the scale of what we were doing.

Minding The Store (Even Though It’s Closed)

Meanwhile, there were plenty of decisions to be made and plenty of sleep to be lost in keeping Eighth Generation going as a producer and seller of Native goods. To protect its team and the community from the spread of the virus, the brick-and-mortar store in Seattle’s Pike Place Market had to close temporarily. Our two number one goals [are] to keep our staff healthy as well as keep our staff on payroll. That is a huge goal of ours in this time, and so, yes, we did have to get creative and find other things for our store staff to do, now that the store is closed.

And this is where Eighth Generation’s COVID-19 response informed its overall vision. In the context of the pandemic, and the resulting changing, economic situation, Eighth Generation is pivoting, to start focusing on our in-house-made products. Gong had stated his goal of achieving a sort of textile independence back in November, but COVID-19 really lit a fire under him and his company. Eighth Generation had workers who couldn’t work in the store, and there was lots of learning and preparation to be done for a phase of business that was somewhere on the horizon. Suddenly, the time for that evolution was now.

In 2019, we had started something that we had called the urban manufacturing initiative, Lawrence says. It was kind of a serendipitous thing, where we had made a goal in 2019 to produce more textiles in-house. The urban manufacturing initiative is now on the forefront of our priority list and Louie’s priority list. A part of the shifts that we’ve made is that Louie, for the past few weeks, has been really investing his time and energy into getting that production going in-house of textiles while I’m managing the staff. It’s really exciting because now we have this concentration on producing more items in-house rather than outsourcing. That makes us feel really good and empowered. So, we’re trying to find ways to find blessings in this time and everyone on our staff has been able to be really flexible.

We’ve had to put a moratorium on our typical large orders, large production runs of wool blankets, Gong notes. And because of that, this holiday season we’ll be leaning on our in-house production of wool textiles. This Christmas will have a greater proportion of textiles that are made in-house than we did last year. It’ll include scarves, baby blankets, and whatever else our creativity leads us to. We’ll also be able to take on custom projects with our in-house made textiles. We’ll be able to do them at a lower order quantity than we had been able to do in the past, which I think will be appealing to the Tribes and organizations that have been supporting us over the years.

Bringing Tribes and Native Businesses Together

The threat of pandemic, with the obvious hardship and tragedy it brings, can also remind people of the bigger picture, and Gong says that’s happening with Eighth Generation and its customers. There have been some beautiful things that have happened as a result of this really difficult situation, Gong says. We have big projects with a lot of Tribes, [and] going both ways, there’s been a lot of mutual understanding of the need to make adjustments, whether that’s a delayed project or a canceled project. My sense that the idea that we have really healthy relationships with Tribes and organizations around the country has been totally reinforced by everybody’s response to the difficult situation. Were supporting each other. We also work with third party manufacturers and we’ve had to put projects on hold and the people who are manufacturing for us have also been understanding.

At Eighth Generation, we always talk about developing a cycle of support and now what we see playing out is a cycle of mutual understanding that’s allowing everybody to maintain really healthy relationships through this challenging situation, Gong says. We’re getting to know the human beings behind the projects more than ever now because of the challenging circumstances related to the pandemic. So, it’s not just business as usual, we’re checking in on each other to see how we’e doing and if everybody’s healthy and people are checking in on us and all of that feels really good.